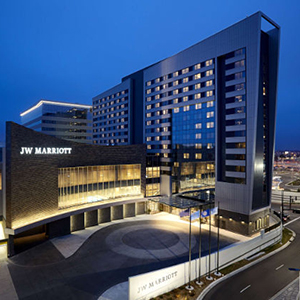 Marriott is well known among business and leisure travelers for providing an exceptional guest experience. As the world’s largest hotel company, Marriott International, Inc. has nearly 6,000 properties in 120 countries and territories. Engineers designing Marriott hotels understand that poor ventilation, odors, and discomfort can quickly erode the guest experience and have committed to ensuring proper ventilation.

This document gives a high level overview of the pilot project in which American Aldes provided proof of concept to Marriott, resulting in energy savings and healthier indoor air quality for all new Marriott properties through the use of American Aldes Zone Register Terminals® (ZRT).

Even in continuously operating central systems, where the hotel is in control of ventilation, many factors still impact the effectiveness of ventilation, including stack effect, wind effect, and poor ventilation system installation and maintenance. Compounding the inefficiency problem is the variable occupancy conditions. Even when a hotel is at full capacity, studies show that rooms are only occupied 72% of the time; guests are at local conferences, meetings, or vacation-related activities and many only return to the room to unwind for a short time and sleep. More airflow is required when guests occupy a room; only low-volume airflow is needed when rooms are unoccupied.

The goals were to provide constant balanced and regulated exhaust and makeup air in each space at the recommended rate at all times, and provide efficient demand ventilation when needed; ensure healthy indoor air quality for guests; control stack effect; and realize energy savings in the process.

Aldes recommendations
Among the recommendations was to install American Aldes Zone Register Terminals (ZRT) for exhaust in each guest bathroom and supply air in each vestibule or sleeping area. This would provide dynamic pressure-independent system control and demand control for both exhaust and supply air.

ZRTs are designed to control a prescribed amount of constant low-volume airflow and demand boost when needed. ZRTs contain pressure independant constant airflow regulators, CARs, that automatically adjust to changes in pressure, keeping airflow consistent regardless of the amount of pressure in the system. This compensates for the opening and closing of dampers, stack effect and other environment-related pressurization control issues. ZRTs are also designed to provide demand boost ventilation when needed; a closed damper allows precisely regulated low volume airflow. When the system is activated by an occupancy/humidity sensor, light switch or wireless transmitter (depending on the control system), the damper opens, allowing precisely regulated high-volume airflow.

Installing and evaluating ZRTs
Over the course of one year, ZRTs were installed in guest room vestibules for supply air and in guest bathrooms for exhaust ventilation. ZRTs in guest vestibules were set to shut off when the room is unoccupied and automatically supply a regulated volume of 40 cfm when occupied. ZRTs in guest bathrooms were set to shut off airflow when the bathroom is unoccupied and automatically exhaust air at a rate of 35 cfm when occupied.

American Aldes and Independent Engineering Firms (for unbiased interpretation) assisted Marriott with calculating the energy impact of continuous versus demand controlled ventilation. American Aldes Engineering department developed the AVCE6 performance calculator built using TMY data over the past 20 years to give the most precise and effective results.

Energy savings was at the top of the list. However, the guest experience was overwhelming and complaints diminished drastically, so much so that Terry Smith, Vice President of Engineering Global at Marriott International added American Aldes ZRTs to the Global Design Standards for all new Marriott properties. The mechanical design standards now include ZRTs for the Guestroom Supply Ventilation (a ZRT in the vestibule ceiling to supply makeup air), and the Guestroom Bathroom (a ZRT in the shower and toilet compartment to provide exhaust ventilation). Since 2011, tens of thousands of Car-II’s & ZRTs have been installed in hundreds of Marriott properties worldwide and continue to be specified in all new buildings and in renovations.

Aldes-developed solutions continue to benefit Marriott and other Hotels
During the course of Marriott’s renovations, other property owners that manage both Marriott and other hotels requested American Aldes’ assistance in working with local and state energy companies. Aldes is now providing solutions to the Massachusetts area through Eversource, the state energy corporation. Eversource utilizes the Aldes-developed AVCE6 to calculate the rebates to be given based on projected savings utilizing the CAR-II line up.

Hotels across the nation with recently installed ZRTs